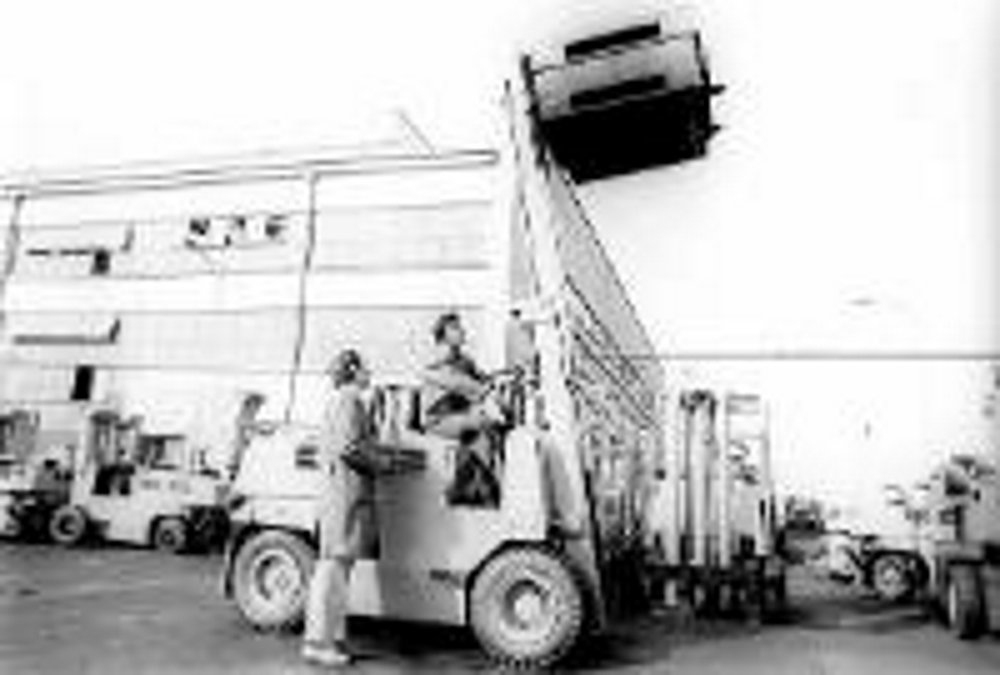 The production of trucks in Bulgaria started in 1952 when the first test series of Bulgarian electric platform trucks have been developed. In 1957 started the serial production of trucks in Bulgaria in plant “6th of September 6” in Sofia, which at that time produced trams and trolleybuses. In the early ’60s, the factory has been reallocated in new facilities, equipped together with the French company “Renault”.

In 1957, Bulgaria realized the first export of the new products – 150 platform trucks were sold in Czechoslovakia and in the USSR.

In 1958, the first significant contract for export of material handling equipment was realized – over 3000 machines were delivered to China.

In the early 60s was opened new factory “Dunav” in the city Lom (port on Danube river), which later on specialized in  production of electric platform trucks and tractors. The capacity was 15,000 to 18,000 units per year. In the city of Pleven has been launched the production of pedestrian controlled trucks and forklifts. In average, the annual output of this plant during its operation reached 8,500 to 9,500 units. In the city of Plovdiv is located the famous ans still operational factory “Record”, established in the early 70’s. At that period, “Record” specialized in the production of engine-powered trucks.

During the years after, the increased volume of forklift production and the aggressive export policy deepened further Bulgarian specialization in this field of production. In 1963, was established the “Institute for Electrical and Engine-powered trucks” – this is a unique worldwide research and engineering design center.

The structure of the state owned company “BALKANCAR” consisted of not only the five major assembly plants. It also included establishments for producing intermediate products used in the creation of electrical and engine-powered forklifts.After 80’s in its composition “BALKANCAR” included 39 branches – 31 in the country and 8 abroad. Its factories produced also buses, cars, bicycles, trolleys, hydraulic systems, traction batteries, heavy trucks and more.

From year to year the number of transport-lifting machines that make our country grow. In 1978 Bulgaria comes first in the world in total volume production and export of diamonds. In this position our country holding decades. The largest number of trucks that are created in this country for years was reached in 1987 – about 89,000 units. For comparison, this time in all other European countries generally produce around 17,000 to 18,000 such machines annually.

The majority of the production of Bulgarian electricity and trucks is exported. The total number of trucks produced reached 1.5 million in 1992 unitsi. By 1995, the average annual volume of production runs in the 70 thousand to 75 thousand items of machinery.

We take pride in every project we have done. We have grown a lot with our work years.

Forklifts produced over the years

Scroll to top
We use cookies on our website to give you the most relevant experience by remembering your preferences and repeat visits. By clicking “Accept”, you consent to the use of ALL the cookies.
Cookie settingsACCEPT
Manage consent

This website uses cookies to improve your experience while you navigate through the website. Out of these, the cookies that are categorized as necessary are stored on your browser as they are essential for the working of basic functionalities of the website. We also use third-party cookies that help us analyze and understand how you use this website. These cookies will be stored in your browser only with your consent. You also have the option to opt-out of these cookies. But opting out of some of these cookies may affect your browsing experience.
Necessary Always Enabled
Necessary cookies are absolutely essential for the website to function properly. This category only includes cookies that ensures basic functionalities and security features of the website. These cookies do not store any personal information.
Non-necessary
Any cookies that may not be particularly necessary for the website to function and is used specifically to collect user personal data via analytics, ads, other embedded contents are termed as non-necessary cookies. It is mandatory to procure user consent prior to running these cookies on your website.
SAVE & ACCEPT